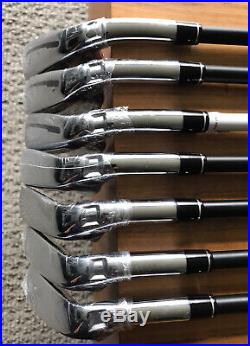 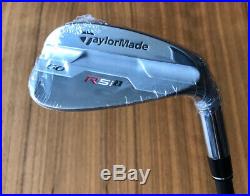 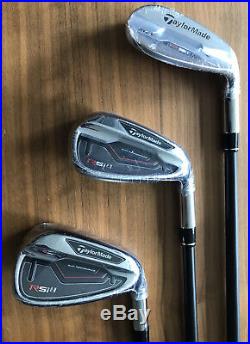 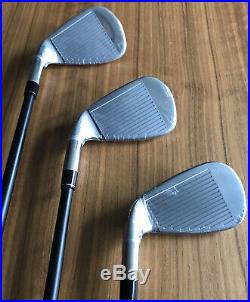 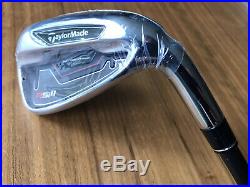 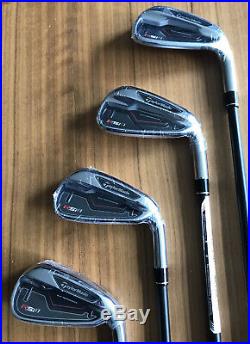 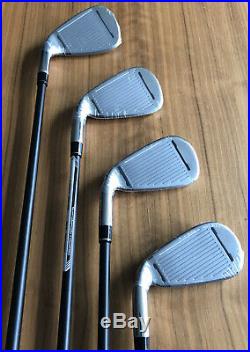 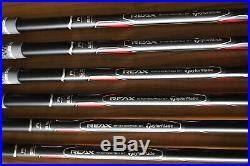 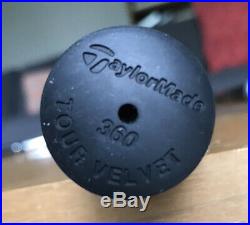 TAYLORMADE RSI 1 Iron Set of 7 4-9, PW+GW Regular Flex Graphite REAX 65 Right Hand. The TaylorMade RSi 1 irons are designed for the average golfer who doesn’t always hit the “sweet spot”. By adding slots in the sole and on the face of the RSi irons, TaylorMade is helping golfers by providing uniform flexion of the face even when the ball is struck off-center. The result: less distance lost on mis-hits. The RSi irons will not only make your misses better, but those shots that are pure are improved, thanks to inverted cone technology and an ultra-thin face. The RSi 1 irons provide a hot face with great forgiveness making them a great option for golfers looking for a game-improvement iron. These irons come with stock True Temper Reax 90 shafts and are available 3-LW. Slots in the face of the 3-8 irons provide uniform face flexion to preserve ball speed on off-center hits to reduce distance losses on mis-hits. Speed Pocket with Thruslot. The slot in the sole of the 3-7 irons allows the bottom of the face to flex when the ball is struck low on the face to further preserve ball speeds. Using driver technology, TaylorMade combined a thin face and deep undercut cavity to give the RSi irons a higher COR for faster ball speeds. PLAYABILITY: Useful in tough liessharp, substantial sole is unfazed by thick turf; malleable trajectory manages everything from knockdowns to moon shots; mostly straight but can work basic draws and fades with a little effort; short irons are surprisingly deft around the greens. ACCURACY/FORGIVENESS: A good balance of accuracy and forgiveness; shots fly rail-straight, like theyre on a track, with almost no curve; misseseven some thin shotsoften get up around the green, which is a pleasant surprise. DISTANCE CONTROL: The clubs strongest performance category; RSi1 short irons are laser-guided on scoring shots; less than perfect strikes go a respectable distance; good bite for a game-improvement model. FEEL: Its all about power, with a solid crunch at impact that packs plenty of juice; plays on the heavy sideeasy to track and rock-steady through the turf; the clubface seems to take the edge out of poor contact. LOOK: Lots of support here, with a reasonably thick topline and weight low; wears its forgiveness right on the facechannels around the hitting area are a little exotic but can be reassuring; plenty to remind you that TaylorMades engineers have your back. The RSi1 has black lines framing the hitting area that can be distracting; some guys want a more rewarding or polished feel at impact; not everyone experiences ultimate consistency and distance control on misses with the mid- and long irons. The RSi1s bold, progressive design offers a nice blend of agility, length and forgiveness. MORE INFO ON THE TAYLORMADE RSi1 IRONS. From the December 2014 Issue of Golf Magazine. To squeeze more distance out of their irons, the club makers of old could only strengthen lofts, shift CGs and strip weight from shafts. Eventually, stronger, lighter materials and undercut cavities led to thinner, more flexible faces. But check under the hood of todays top-of-the-line distance irons, and what youll find looks more like a wood than ever. TaylorMades been at the forefront of the distance-iron revolution. In 2009, the companys engineers built technology from its woods into first-generation Burner irons. Those sticks utilized an inverted cone face design and the benefits were obvious: higher COR, faster ball speed and big distance. However, it created a significant problemthe distance was often inconsistent, particularly on shots struck away from the sweet spot. So, two years ago, TaylorMades R&D team came up with the speed pocket, a cutout in the sole to increase ball speed on shots struck low on the face. Since then, the company added a thru slot behind the face for even more flex and higher launch on those low hits. TaylorMades new RSi irons take it one step further with slots on the face in the heel and toe, in addition to the cuts on the sole and cavity. The company says this combo provides more uniform flex, ball speed and consistency across the clubface, regardless of whether you miss it high, low, or toward the heel or toe. The RSi series consists of two models for the vast majority of players, as well as a blade-like TP version aimed at Tour players and top amateurs. Both the RSi 1 and RSi 2 feature face slots in the 3-8 irons, speed pockets with thru slots in the 3-7 irons, and the thin, inverted cone throughout the set. The RSi 2, which replaces SLDR irons in TaylorMades lineup, has a more compact profile, thinner topline, slightly less offset and less sole bounce than the RSi 1. The multi material RSi 2 has cast, stainless steel long irons (3-5) with tungsten weighting to produce higher launch angles, and forged face short irons (8-PW) to enhance impact feel. The midsize RSi 1, which replaces SpeedBlade irons, has a deep undercut behind an ultra-thin face. A larger area of the face maintains high ball speeds than in its sister irons. In addition, the sand and lob wedges have the companys multi purpose ATV sole grind for playability from a variety of lies. The item “Brand New! TaylorMade RSI1 Iron Set 5-PW+AW RH REAX 65 Reg Flex Golf Club” is in sale since Saturday, September 12, 2020. This item is in the category “Sporting Goods\Golf\Golf Clubs & Equipment\Golf Clubs”. The seller is “in_9170″ and is located in Grand Rapids, Michigan. This item can be shipped worldwide.